One material was chosen for its conformability to sheet metal, and the other for its compatibility with the ABS plastic lamp housing. Unfortunately, a moisture infiltration problem developed and another look had to be taken at the gasket design by Chrysler’s exterior lighting specialists. Their solution? A single component, low density cellular elastomeric gasket. 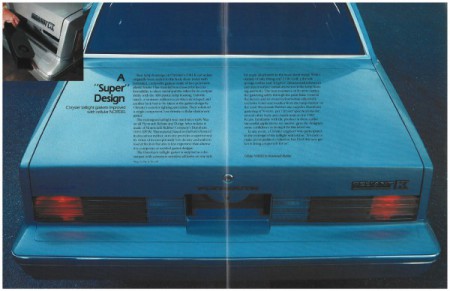 In 1974, Monmouth commercialized the world’s first 100% EPDM, low density,closed cell sponge. Proprietary Durafoam technology allowed Monmouth to produce C191XLDS in densities as low as to 2.0 pounds per cubic foot. One outstanding, commercially successful application for this technology was as a sealing gasket for all Chrysler tail light lamps. In 1979, Monmouth was successful in having Durafoam C191XLDS introduced at Chrysler as the only approved source under MSAY 527 A, B, & C.

Durafoam C191XLDS (100% EPDM) solved a major leakage problem Chrysler had on its “K” cars. Durafoam C191XLDS, with its attributes of softness, conformity and 100% closed cell rubber structure, allowed for foolproof sealing of Chrysler’s tail lamp gaskets. Monmouth was recognized by Dupont on its literature for this significant achievement and problem solving technology.

The redesigned tail light seal, used in early May on all Plymouth Reliant and Dodge Aries sedans, is made of Monmouth Rubber & Plastics Durafoam 100% EDPM. The material, based on DuPont’s NORDEL hydrocarbon rubber, not only provides a superior seal by virtue of its exceptionally low density and uniform load deflection, but also is less expensive than alternative composite or molded gasket designs.

The Durafoam taillight gasket is supplied as a die-cut part with a pressure-sensitive adhesive on one side ready for attachment to the body sheet metal. With a density of only 64mg/cm3 (4 lb./cu. ft.), the soft sponge rubber seal “forgives” dimensional tolerances and minor surface variations between the lamp housing and body. The heat resistance of NORDEL carries the gasketing safely through the paint bake oven in the factory and its closed cell structure effectively excludes water and weather from the lamp interior on the road. Monmouth Rubber also supplies Durafoam gasketing of NORDEL, per Chrysler specifications, for several other body and chassis seals on the 1981 K cars. Familiarity with the product in these earlier successful applications, we assume, gave the designers some confidence in trying it for its latest use.

In any event, a Chrysler engineer who participated in the redesign of the tail light seal told us, “It’s early to make an unqualified evaluation, but I feel this new gasket is doing a super job for us.”