Overview of Nitrile Rubber and its Applications

Nitrile Butadiene Rubber is a petroleum-based, oil-resistant synthetic rubber also known as Buna-N, Perbunan, or NBR.  Because of its compatibility with most environments and relatively low cost when compared to other rubber materials, it is one of the most the most commonly used rubbers.

NBR is a copolymer of acrylonitrile (ACN) and butadiene.   Although its physical and chemical properties vary depending on the exact composition,  this synthetic rubber is considered to be highly resistant to oil, fuel, and other chemicals (the more nitrile within the polymer, the higher the resistance to oils but the lower the flexibility of the material).

Nitrile rubber is used in the automotive and aeronautical industries to produce fuel hoses, oil hoses, grommets, seals, and binders.  It is also used to manufacture gloves, molded and extruded products, adhesives and sealants, cables, sponges, expanded foams, and floor mats. Thanks to robust economic growth in the Asia Pacific region, and to increasing motor vehicle production and sales across the globe, the market for NBR continues to grow.

One of the major constraints to market growth in Europe and North America is environmental regulation and concern for the environmental impact associated with these products and their manufacture.  For example, butadiene has been listed as a toxic substance under the Canadian Environmental Protection Act.

There are three tactics in use to mitigate the environmental impacts of synthetic rubbers such as NBR.  The first is to reduce the emission of greenhouse gasses during production.  The second is the introduction renewable sources of feedstock in production.  The third is to limit the contribution of discarded rubber to landfill buildup.

The Use of Renewable Energy in the Production of Nitrile Rubber

There is a widespread push to develop high quality rubber that isn’t sourced from petroleum.  High prices and declining supply of petroleum raw materials and natural rubber have increased the rubber manufacturing segment’s appetite for renewable, bio-based feedstock.   Butadiene, a key ingredient for NBR,can be produced with the help of renewable raw material sources such as non-food biomass. Sugar, glycerin, and other plant-based raw materials are evolving as economically viable materials to replace conventional feedstocks, including butadiene and isoprene. Michelin, for example has partnered with technology firms to convert biomass to butadiene.

The Impact of Synthetic Rubbers on Landfill Buildup

Overall, rubber, leather, and textiles constitute as much as 8 % of all landfill bulk.  Given the staggering amount of waste produced in general, 8% represents a significant burden on the environment.  Synthetic rubber waste comes from discarded used product and as a by-product of manufacturing.  For example, the latex industry has grown significantly over recent years in response to global demand for products like examination gloves, condoms, and latex thread. Due to strict specifications for these products, defective product rejects create a major disposal problem. At the same time, there is a worldwide call to reduce landfill buildup and environmental pollution.

There are three methods considered appropriate for the disposal of rubber waste: recycling, incineration, and biodegradation.

Recycled rubber products can be more cost-effective, and are eco-friendly because their production takes non-biodegradable waste out of the environment. Rubber can be recycled using one of three basic methods. First, a rubber product can be refurbished. For example, retreading old tires produces functional refurbished tires. Second, rubber can be mechanically broken down and formed into an entirely new product, such as playground surfacing. It should be noted that there are a shrinking number of organizations that can efficiently perform this function. Third, incineration can produce energy used for manufacturing processes, electricity or other purposes. Rubber recovery for recycling can be a difficult process involving high heat and toxic chemicals, which can make environmentally sound rubber recycling difficult.

There are many reasons why rubber should be reclaimed or recovered. Recovered stock can cost half that of natural or synthetic rubber and can have some properties that are better than those of virgin product.  Producing rubber from reclaim requires less energy in the total production process and is an excellent way to dispose of unwanted rubber products, which is often difficult.  It also conserves non-renewable petroleum products, which are used to produce synthetic rubbers.

Combustion of natural rubber latex can be quite clean, although some hydrocarbons and sulfur dioxide may be produced at low incineration temperatures. Nitrogen-based reaction products are also released minimally during incineration of nitrile; while other chemical by-products are similar to those produced in the disposal of natural latex. Incineration methods and differing technologies can reduce the environmental pollutants and provide a value in energy production.

The most common means of disposal is landfill and biodegradation of unwanted rubber materials.  Unlike natural rubber, synthetic rubber compounds, like NBR, have been reported to be more resistant to microbial attack.The variation in biodegradation ability between natural and synthetic materials is primarily because synthetics have not been available for a long-enough time in natural evolution for microorganisms to develop degradative enzymes capable of utilizing the compounds.  That is, microorganisms have not had enough time to evolve new genes and genetic functions to degrade chemicals generated by the chemical industry. Therefore, there are several synthetic-biology companies working on additives to the manufacturing process that will accelerate the natural bio-remediation of rubber in the waste environment.

New technologies allow us to manufacture Nitrile rubber from safer and more sustainable sources. Recycling and refurbishing rubber mitigates the amount of waste rubber deposited in landfills. At the same time, emerging technologies will accelerate the natural bio degradation process of discarded NBR.  In short, it is only when rubber is created with legacy or irresponsible production processes, or when the products and bi-products are carelessly discarded, that rubber harmful to the environment. 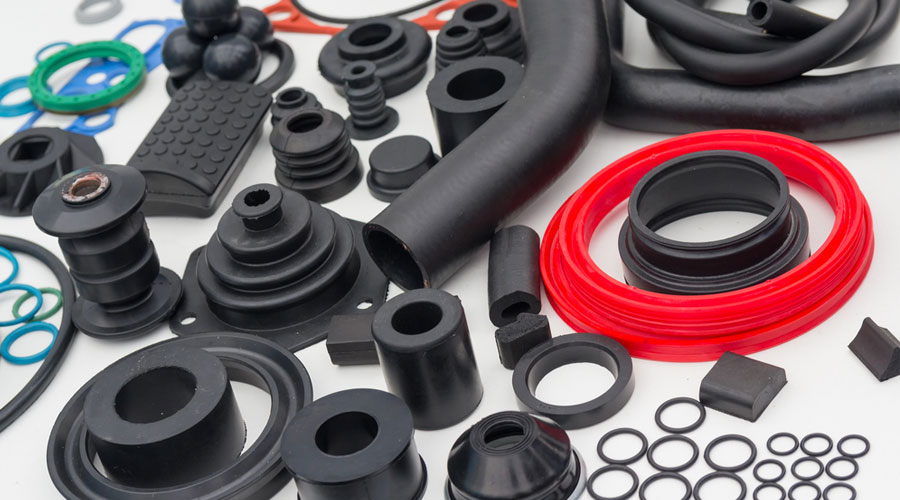